What is Fairfax City’s best kept secret? We have a world-class fencing club, the Fencing Sports Academy (FSA) – right next door to Twins Ace Hardware! FSA is one of the highest ranked fencing clubs in America, and has athletes competing on the national USA Fencing Team. There’s Hadley Husisian who is currently ranked 2nd in the U.S. and 14th in the world. Anne Kropp ranks 4th nationally, and Reagan Nix is 7th. Other Team USA fencers from FSA include Roy Graham and Aiden Lee. FSA recruits coaches who have coached or participated in fencing at the Olympics, National, and/or World Championships. Keep an eye out for these amazing athletes and their coaches in the next Olympics!

However, the Fencing Sports Academy is not just for champion athletes! The club welcomes beginners, intermediates, and social fencers too. It offers camps and themed birthday parties for a fun taste of fencing.

There are many beneficial reasons to start fencing, whether as a child or an adult. Students are developed both physically and mentally as they learn quick footwork, mental focus, balance, confidence, and quick strategy planning – all of which are keys to fencing success. A number of young FSA fencers go on to academically rigorous schools such as Harvard, Princeton, MIT – and with scholarships to boot.

Stop by FSA and “take a stab” at fencing!

Fencing Sports Academy is located at 10310A Main Street, Fairfax, VA 22030 in the Main Street Marketplace.

Read more about Fencing Sports Academy below from the intrepid owner, Connie Schreiber. 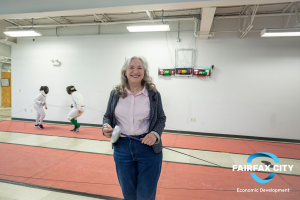 Tell us a little about Fencing Sports Academy.

The Fencing Sports Academy teaches the Olympic Sport of Fencing in all 3 weapons. As we like to put it: We teach fencers of all ages and levels how to legitimately take a stab at each other. 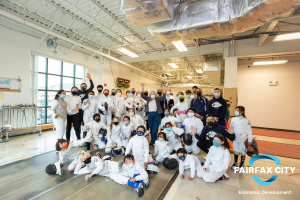 The Fencing Sports Academy is the only fencing academy in the city and is the premier fencing club in the Washington DC area and among the top 10 in the USA.

What encouraged you to take the leap to get started?

The Fencing Sports Academy started out in the Sideburn Community Center in 2011 and has been in the city ever since. From the Community Center the Academy moved into the Olde School on Main Street and then across the street to its current location.

What inspired you to open Fencing Sports Academy in Fairfax City?

When our children were young, they enjoyed the 4th of July parade. The small cars and the lemonades were always a hit creating fond memories for our family. Those experiences made the decision easy regarding the location of a fencing academy when both children became successful fencers. The central location of the city with its many opportunities for social activities, playgrounds, walking paths, public concerts were enjoyable. Having City Hall close by and easily accessible was a big draw as well. 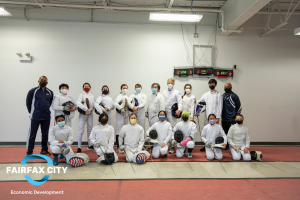 What do you enjoy most about having a business in Fairfax City?

City employees are helpful and supportive. Many places are within walking distance or can be reached with public transportation. The city has a great mix of history and future while maintaining a hometown feeling. Business owners are friendly and run from Ace Hardware to top notch computer companies.

How has Fencing Sports Academy changed since its opening? 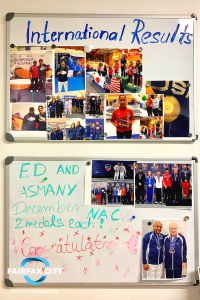 What do clients say they love about Fencing Sports Academy?

Our customers like that the staff is aware and can talk about what makes fencing such a special sport beyond the medals and the trophies. The enthusiasm of the coaches for the sport is obvious.

What are some of your fondest memories or biggest successes since you’ve opened?

The festivals in the City and the street party for the soccer world championship come to mind right away.
Having several fencers travel on the international circuit and having a World Championship medal hanging on the wall in the office are energizing and motivational successes. 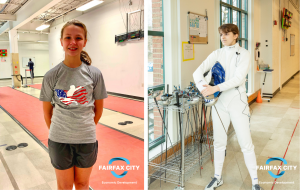 What’s next for you and Fencing Sports Academy?

Connecting the Fairfax Challenge, a sequence of tournaments sanctioned by the United Fencing Association with the City and what it has to offer.
Improving the relationship with the fencing club at George Mason University.
Continue to train nationally and internationally successful fencers.

Are there any fun facts you would like residents and visitors to know?

Many of our parents enjoy being able to drop off their kids for their classes and have a nice dinner in the many restaurants in the Old Towne portion of Fairfax City. The Wine House, Bistro 21, and so on. Of course, they also take advantage of the many stores to fulfill their shopping needs, be it Starbucks, Ace Hardware, TJ Maxx, Marshalls and, of course, the grocery stores.

When you’re not working, where in Fairfax City do you like to spend your time?

In the summertime having social meetings outdoors at Starbucks or The Coyote Grill is fun. Choosing a location for a business meeting with so many options like the Wine House and many of the other tempting locations is a challenge. The Chocolate Festival is irresistible.